Free shipping on $50+ in continental US & Canada! Shop Now Why get Wholesome Yum Keto Pancake Mix if you’re just looking to buy keto pancakes? Because making this one will get you fluffy pancakes in just a few minutes, without processed, artificial ingredients.

Our low carb pancake mix with almond flour and coconut flour has the taste and texture of regular pancakes, but with much fewer carbs, no grains, and ingredients you can recognize. Each generous serving (5 3-inch pancakes!) has: Can You Eat Pancakes On Keto?

No, unfortunately most pancakes are off limits if you are low carb or keto. But the good news is, these easy low carb pancakes are keto! Which means you don’t have to give up pancakes or spend hours in the kitchen.

Where To Buy Keto Pancakes

Wondering where to find keto pancakes that taste great? Get a ready-to-make mix right here at Wholesome Yum Foods! Add it to your cart above and see for yourself how much they taste like regular pancakes.

To make the pancakes, you’ll also need 3 simple staples you probably already have:

Why Use This Keto Friendly Pancake Mix?

So, what makes these the best keto pancakes? For one, they are based on the recipe that has already been visited and loved by millions. And of course, it has all the benefits of regular pancakes…

…But unlike wheat pancakes, there is no blood sugar spike and crash, fat storage, or other negative effects of wheat and grains.

If that doesn’t convince you there are more reasons to buy keto pancake mix here. In addition to taste and texture, it ticks all the boxes for a healthier pancake alternative:

✅ Keto friendly – Won’t kick you out of ketosis!

What Do Wholesome Yum Low Carb Pancakes Taste Like?

Wholesome Yum low carb pancakes taste like regular pancakes! They are light and fluffy, with a neutral flavor, a touch of sweetness, and a hint of vanilla.

Here at Wholesome Yum, Maya develops each product, and our standards for taste and texture are extremely high. Our low carb pancake mix is completely natural, with real food ingredients you can recognize, without giving up the taste and texture you expect.

How To Make Keto Pancakes Using Our Mix

Wondering how to make low carb pancakes from our mix? It’s super easy and you’ll find these instructions on the back of the package:

The texture will improve if you let your keto friendly pancakes cool a bit from hot to warm. Enjoy!

What To Serve With Almond Flour Pancakes

Need ideas for what to serve with your pancakes? Try these ideas: They are light and fluffy, however, the sweetness over powers the pancake flavor. I wish the mix was made with less sweetener. I would not buy this product again.

I typically do not purchase pre-made mixes, but since I'm a big fan of everything on Wholesome Yum, I decided it wouldn't be the end of the world to NOT make something from scratch. Tonight, I was craving something sweet after dinner and my husband asked if I was going to try this pancake mix I recently bought. Great idea, right? I made these with unsweetened almond milk, popped them in my mini-waffle iron, and OMG they tasted just like funnel cake. SO delish!

Very tasty for being keto pancakes. They were very easy to make, I followed the recipe exactly as it was given. The only issues I had were the consistency was off and they disintegrated when I tried to pick it up. Also, they weren't very fluffy like pancakes they were more flat like naan bread. One more thing, no matter what temperature I cooked it at they always looked burnt. Other than that I really liked them the taste was there especially with the keto syrup. That made the whole thing work.

Thank you for the feedback! The issues you describe sound like the skillet was too hot - this would cause the outside to burn and the inside to be too fragile. Try a lower temp next time.

I made pancakes with this mix for the first time today, and decided to mix in some frozen tiny wild blueberries and some finely chopped, crisply cooked turkey bacon. They truly were both wholesome and yum(my)!

I made pancakes and bacon for breakfast this morning! Who would have thought you could eat this way on KETO! The mix was easy to put together and made delicious pancakes. I could not tell the difference between these and my old pancake mixes I used before going KETO. My husband loved them too! Going to try putting some chopped blue or black berries next time for extra flavor!

My box of goodies came in the mail today and but was the perfect evening to have pancakes for dinner! The mix was easy to whip up and the pancakes tasted great! The kids and my husband raved too! 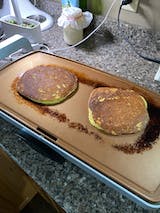 Your keto pancake mix is very good. One improvement I would make is lower the sweetner so it does
not overpower the pancake flavor. It took me a little time to learn how to cook them so they were light
and fluffy. I use olive oil in the pan and the heat has to be correct so they cook without burning so you
can flip them over without them falling all apart.

It’s easier to use a mix when making keto versions of favorites like pancakes. Since I was already familiar with the top notch Wholesome Yum Maple Syrup, I tried their pancake mix.

Instructions for the batter were straightforward, just egg, oil, mix and milk. To keep carbs to a minimum, I used the suggested half cream, half water instead of milk. The outcome for a single portion was rather thick and wouldn’t pour, so I added more cream/water, but multi-portion batter mixes worked out well.

Keto pancake formulations cook quickly, making temperature control important so that things don’t happen too fast. Turning keto pancakes over also isn’t easy. Small pancakes are better here so one can get the spatula under the entire pancake. Gluten free has its cost.

The result was a fluffy pancake with good texture and pleasant taste. The allulose sweetener eliminates any unwanted aftertaste so that only the gluten springiness is missing.

D
D.J.
I really enjoy these!

I have attempted to make keto pancakes from scratch and not had good success. This mix is tasty and easy. The pancakes are good and I have them every couple of weeks. So happy to have found this mix.

I made my first purchase of the keto pancake mix. I will be honest that I was a bit skeptical that it would taste like "real" pancakes. I followed the directions to a "T." The consistency of the mixture after preparation made me nervous. I felt like it was a bit thin even after resting for a couple of minutes. But I made 3 inch pancakes as directed. They cooked nicely and held their shape with no problem. Then, came the taste test. All of my family members were shocked that the pancakes were keto. I was very impressed and I highly recommend. I plan to purchase more!

Customers who purchased this also liked...

Join over 200,000 subscribers for coupons and recipes!

Wholesome Yum Is Featured On:

FREE SHIPPING on all orders over $50!

What are you looking for?